Yay! What fun! Now I want to see if some students in MBMA want to join me :)

Each year I walk for Relay-4-Life RL. It’s something that I enjoy doing. But this is a neat way to get involved in SL.  I was talking to my good friend Cham and she passed this note card to me describing the cause. How cool huh? I signed up, and had my picture taken by the talented Maria Parkin (marir.parkin), and donated 1k for my official picture. However, I’m too excited and anxious to post what I looked like for it, so I did a 10 minute snapshot of myself and 2 minute photoediting. I’m sure I didn’t do myself any justice! But, it’s for a good cause! Style card coming. Information located below this picture.

Oh, and I passed my Opium Advanced Course. :) yay! Now, just waiting for that lucrative piece of purple paper. See you guys at the stores!

According to the American Cancer Society (ACS), a woman in the United States is diagnosed with breast cancer every three minutes, and every year approximately 50,000 die from this disease.

This campaign will show some of the most important fashion figures on the grid going bald to show support for the cause.

The idea is not to raise money, but to raise conscience and awareness about a subject that concern us all, to some more direct than to others.

If you wish to take part of this campaign follow this simple steps.

1. Style yourself in any style you would like to portray. Groups, Couples or singles are accepted.

2. Get completely bald, we mean absolutely no hair on your head.

3. IM one of the photographers in the campaign and ask for an appointment and ask him/her for the pink ribbon and add it to the style you already created.

4. Pass the word around.

These campaign will run only on October, so make sure you make your appointment before the month is over.

All Images will be added to the “Pretty Bald in Pink” Flickr Group and emailed to those that ask for it. 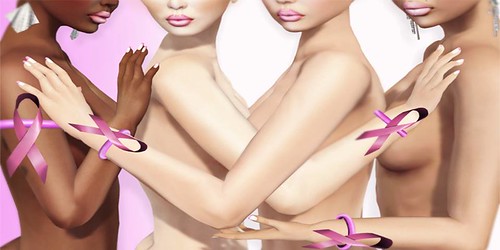 For a Pink World Without Breast Cancer.

If you wish to become a photographer, blogger or sponsor please IM LovelyMiwako7399 Menna, or send her a notecard in-world expressing your interest in the photo campaign before September 28th, 2011 @ 10am SLT.